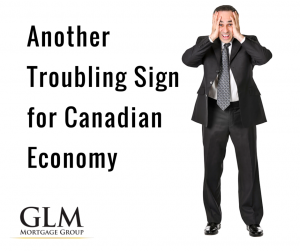 The Canadian economy contracted in May by 0.2 percent, the fifth consecutive monthly decline.

Here we go again. Another in a long list of serial disappointments for the Canadian economy. What is particularly troubling about this one is that the main culprit for the decline in May GDP was manufacturing, a sector that was supposed to be boosted by the weak Canadian dollar. This portends badly for the expected recovery in the current quarter as manufacturing exports continue to frustrate policymakers.

Manufacturing output alone fell by 1.7 percent in May on the heels of no growth in April. The biggest culprit was a contraction in the manufacture of durable goods.

The chart below shows that mining and oil and gas extraction continued weak, although the decline was nowhere near as large as in April.

The bright spots were construction and the output of real estate agents and brokers, which increased 2.1 percent, up for the fourth consecutive month. The weak loonie did boost tourism as hotel and food services were up 0.9 percent.

Another rate cut by the Bank of Canada hinges, in large measure, on next week’s jobs report for July. It is the most current data we have and if it shows any sign of deterioration, recession fears will mount and the Bank will once again be proven overly optimistic in its expectation for a meaningful rebound in the current quarter. 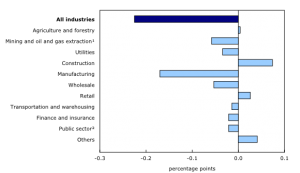 Industry Sectors’ Contribution to Change in May GDP