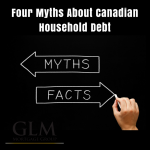 Canadians are obsessed with debt — snapping up loans with record low interest rates to get in it — and then fretting, as debt ratios rise — about getting out of it. No other financial issue, apart from the ever-looming housing bubble, has generated as much angst in this country as household debt, points out BMO senior economist Sal Guatieri.

Credit card holders who miss two minimum payments will now get dinged with a higher interest rate on their next bill as Canadian banks begin to crack down on customers in arrears.

And we’re not the only ones who are worried. In a recent report, McKinsey Global Institute grouped Canada with six other countries as having the worst debt problems in the world.

Is our debt really that bad? Guatieri looks at the real numbers behind the popular perceptions.

Not true, writes Guatieri. Canadian household debt hit 161% of disposable income at the end of 2014, below the peak of 165% seen in the States at the end of 2007. Moreover, when adjusted to better compare with how the U.S. calculates the ratio, Canada’s ratio drops to 151%.

This might have been true two years ago when household credit was surging at about 9% a year, says the economist. Since then, debt has risen only slightly faster than incomes. Canadians are now borrowing at the slowest pace in more than a decade (4.5% in November), Guatieri said. “Tougher mortgage rules, combined with warnings from the Bank of Canada, Ottawa and the IMF, have kept borrowing on a tighter leash. Barring a further decline in interest rates, credit is unlikely to accelerate, though the recent modest upturn warrants monitoring.”

Myth 3 — Many Canadians with poor credit rating are indebted

Wrong, says Guatieri. At the height of America’s housing bubble, one in 5 new mortgages were deemed subprime. In Canada, subprime mortgages accounted for only 5% of new mortgages in 2006, mainly because of tougher underwriting standards. The market for securitized mortgages is also about half what it is in the U.S.

Still, Guatieri points out, the Bank of Canada has expressed concerns about the growth of the shadow banking industry in this country, which is growing at double digit rates, and in a surge in auto loans, many with terms that are longer than the life of the car.

False, says Guatieri. Most households are not burdened with debt; in fact 33% are debt free, up from 29% in 2002. Financial assets tend to be three times greater than debt, delinquency rates on loans have fallen and consumer bankruptcy rates are at record lows.

However, here come the unpleasant truths…

One in 8 households in Canada is heavily indebted

About 12% of families have debts greater than 250% of disposable income, nearly double the amount since 2000. “With little cushion in the event of job losses or higher borrowing costs, this group of heavily indebted households is at elevated risk of default and reduced spending,” says Guatieri.

Because of larger principal repayments, debt service costs have risen higher since 2008, even as borrowing costs hit record lows. At just over 6% of income, aggregate debt service costs aren’t much lower than in 1991, when mortgage and jobless rates were in the double digits.

Albertans (some facing layoffs) are the most indebted

Riding high on the energy boom, Albertans racked up more debt than other Canadians in recent years. The province’s average household debt rose about 41% in the five years to 2014, more than twice as fast as the national rate (15%). The debt ratio has ballooned to 170%. The oil price plunge means slower economic growth and job losses this year will test Albertans’ finances — though if prices recover somewhat as BMO expects — it could cushion the blow.

The bottom line, Guatieri says, is Canadians don’t have a debt problem and are not headed for the housing and credit crunch that brought America to its knees in 2008 — but that doesn’t mean we can let our guard down.

”A significant number of heavily-indebted households are vulnerable to rising interest rates or recession. While close monitoring of credit trends is warranted, it’s too early to sound the alarm bells,” writes Guatieri.