Where are Canadian Mortgage Rates Going in 2018?

Where are Canadian Mortgage Rates Going in 2018?

2017 was a year of change for the Canadian Mortgage Market. With the announcement of the B-20 guideline changes requiring all insured or uninsured mortgages to undergo stress testing. In addition, the removal of mortgage bundling and the continued rate rises from the Bank of Canada have led to significant changes in mortgage rates.

This raises the question: what does 2018 hold? While we cannot be 100% certain, based on predictions and summarizing stats from various corporations, we are able to put together a strong prediction of what 2018 will hold.

As a whole, the Canadian real estate market is expected to see a 5.3% drop in national sales due in large part to the new OSFI guidelines (CREA). With this, there is an expectation of minimal growth for home prices at just 1.9% vs. the 8.5% gain seen in 2017. This is due again to the heightened stress testing procedures.

In addition, the sales of condos and townhomes are expected to increase with new developments of multifamily complexes reaching an all-time high, and the demand for smaller, more affordable houses increasing.

Essentially, the market is going through a period of increased demand for condos and townhomes, leading to potential price increases. In relation to the detached home market, there will be slight price increases, but nothing compared to the growth that was seen in 2016-2017. There is an ongoing trend for homebuyers based in Vancouver and the Fraser Valley to contentedly sit by the sidelines as they save up for a larger down payment before purchasing-further increasing condo ownership and driving demand for rental properties as well.

The Canadian Economy has been growing and surging forward through most of 2017. In the four quarters from the second half of 2016 to the first half of 2017, the Canadian Economy grew on average each quarter by 3.6%. Further, despite a slight slowdown in the second half of 2017, there was a rise in employment Canada wide, posting the annual real GDP growth over 3% in 2017. It was a substantial year for the Canadian economy in 2017 and this growth was directly seen in the real estate and housing market.

As many are aware, to stabilize the economy and ensure balance remains, the Bank of Canada began raising interest rates in 2017 and has plans to continue to do so in 2018. This rise in interest rates serves to steadily and slowly stunt the growth of the economy in Canada. Coupled with the ongoing trade disputes, the Canadian economy is forecasted to slow overall, but will still post an above-trend 2.2% of growth in 2018.

So, what does all of the above mean for the mortgage industry and its rates? Well, with the predicted increase in rates from the Bank of Canada it is safe to say that the mortgage rates will follow. 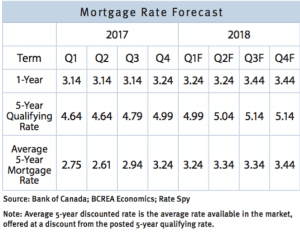 In layman’s terms, the rates are likely to continue to rise alongside the Bank of Canada’s increases. It is important to keep in mind that with planning and budgeting these rates can easily be taken on by the average consumer. A key thing to keep in mind is that a 0.25% rate increase works out to only $13.00/100k increase in your payment. Another fact is that every lender is different in how they will calculate this change. Your mortgage product is unique and may be affected differently than another.

Since the new changes have rolled out there has been a slight decline in consumer demand. As the changes continue to take effect and the potential for more rate increases continues, it becomes more apparent we will continue to see a shift in the mortgage and real estate market.

However, by choosing to work with a broker you are guaranteed to work with someone who has an in-depth understanding of both the changes and the market. They will work alongside you to find the best possible solution to get you the sharpest rate.